The Buzztones! Back on Locust St! 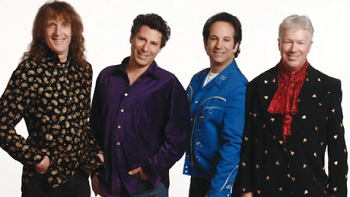 Presented by The Buzztones
November 25, 2017

On November 25th (Official Thanksgiving Leftover Weekend Saturday) Alan Thiele, Dan DeShara, Ken Cooper, and David Martin will be “Back on Locust St!” at the Margaret Lesher Theater located mere blocks from the birthplace of The Buzztones. This concert will be a soon forgotten evening of historical irrelevant acoustic and electric sonic merriment!

Running Time: approx. 2 hours 45 minutes, with one intermission
In the 1980’s when local boys The Buzztones began playing Locust Street establishment The Refectory / Abernathy’s on Wednesday nights, the 60’s sound of British Invasion, Garage Bands, One Hit Wonders, R&B, Guitar Driven Rock & Roll, and pre-Columbian Clog Dancing set the “tone” for a “buzz” that had crowds lining up around the block to hear these young energetic musical lads!

Their fresh sound featured a distinctive singing style (heavily influenced by harmonies of the Lennon Sisters); hook-happy song selections (mostly penned by folks wearing paisley and corduroy); occasionally tuned guitars, and Thiele-rific™ bombastic drums! The Buzztone performances best evoked an infectious, melodic cheer similar to that of the Three Stooges during the Shemp era; with an added hint of patchouli.

Early on, the Buzztones provided something of a revolutionary option for local music fans; who could not understand the words on recordings of the day. Their trail blazing use of teleprompters facing the audience became an immediate hit; only rivaled by the Pet Rock craze of the 1970’s.