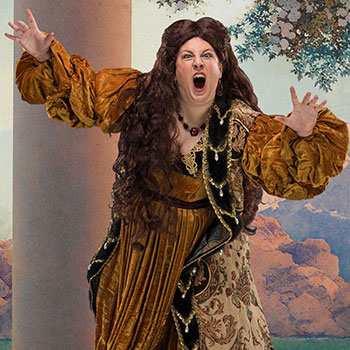 In a time when flirting was a capital offense, a handsome wandering minstrel has fallen in love with the beautiful fiancée to the recently appointed Lord High Executioner. Chaos, desperation, and comical mayhem ensue in classic Gilbert & Sullivan style, with impromptu marriages, substitute executionees, forged death certificates, and the revelation of a prince in disguise.

The comic satire of this brilliant work, ever relevant, is aimed at the timeless and universal frailties of our shared human nature, as told through Gilbert and Sullivan's hilarious plot line, ingenious dialogue, memorable characters, and gorgeous music. This new production will be moved from the traditional setting of a fictitious Japanese village to a re-imagined Renaissance Italy, the home of rapid cultural exchange, scientific advancement and artistic creativity, the tradition of commedia dell’arte, and the favored setting for many of Shakespeare’s greatest creations. The production will be changed visually to reflect our new setting, and a minimal number of necessary edits will be made to the names and dialogue, but this classic masterpiece will otherwise remain intact. We are excited about our new production of The Mikado and hope you will be too!
Visit
1601 Civic Drive
Walnut Creek, CA 94596
Call Us
(925) 295-1400
Keep In Touch