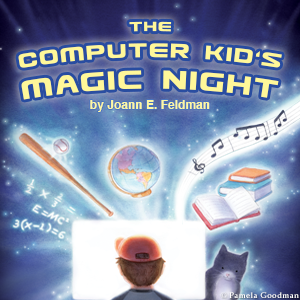 Little Mickey spends too much time playing computer games.  To his amazement one night, several magical characters pop out of his computer to teach him to use technology more wisely!
Solo Opera, is pleased to present the one-hour comic opera, The Computer Kid’s Magic Night.  Written in 1986 by Joann E. Feldman, March 2016 marks the 30-year anniversary of the piece.  The story concerns Mickey, a little boy who spends all his time playing computer games and neglects his studies, friends, piano, and outside activities. One night, he accidentally types magic words into the computer and several characters pop out. Each character has a fondness for a special subject - language, math, music, travel, sports - and convinces Mickey to use the computer to learn about these subjects and spend his time more wisely.

The opera, ahead of its time in 1986, is still quite relevant to audiences today.  Not only are many children hooked on their electronics (iPhones, iPads, Smart Phones, computers games, etc.), but adults and parents are as well!  This opera is a fun way to address the problem of too much technology and how important it is to have a well-rounded education and life.

The opera will contain a cast of eleven singers (10 adults and 1 child) who will be accompanied by a three -piece ensemble of piano, synthesizer, and percussion.  The show will be directed and produced by Solo Opera Artistic Director, Sylvia Amorino, and the Conductor will be William Long, assistant conductor of Opera Parallèle.

“Credit Joanne Feldman... with a shrewd choice of subject, a sense of what will play with both students and teachers and command an operatic form... this is not just a trendy gimmick presented as an opera, it is a legitimate opera, carefully and painstakingly built from a strong musical foundation, according to the long established rules of the game... an endearing and delightful show.”