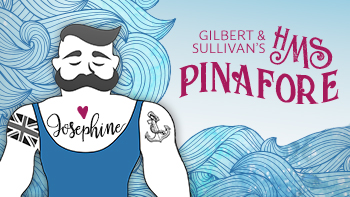 Known as one of the “Big Three” of the Gilbert and Sullivan canon, PINAFORE was Gilbert and Sullivan’s first international sensation. Full of unforgettable songs, drama and comedy, social conflict, and some of the best male chorus music in the canon! With new men’s costumes to complete a historically accurate vision of the show, this production of PINAFORE is sure to be a delight!

The story of a lowly sailor's love for his Captain's daughter, and their brave defiance of her father's demand that she marry the buffoonish First Lord of the Admirality, still touches the heart and tickles the funny bone despite the passage of 137 years since its premiere. With Sullivan's infectious music and Gilbert's witty script and lyrics, a rousing good time is guaranteed for all!