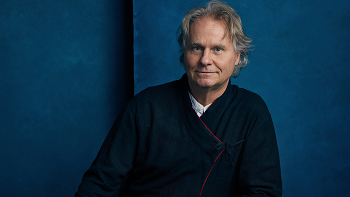 For one night only, Lindsay Wildlife's Conservation Icons is bringing world-renowned anthropologist Dr. Wade Davis to Walnut Creek! Davis is a premiere presenter in the second annual speaker series.  His presentation, "The Wayfinders: Why Ancient Wisdom Matters in the Modern World," will captivate and educate!

Wade Davis is perhaps the most articulate and influential western advocate for the world's indigenous cultures.

Davis is an internationally-recognized anthropologist, ethnobotanist, National Geographic Explorer-in-Residence, filmmaker and photographer, and has been described as "a rare combination of scientist, scholar, poet and passionate defender of all of life's diversity."

Trained in anthropology and botany at Harvard, he travels the globe to live alongside indigenous people, and document their cultural practices in books, photographs, and film. His stunning photographs and evocative stories capture the viewer's imagination. As a speaker, he parlays that sense of wonder into passionate concern over the rate at which cultures and languages are disappearing -- 50 percent of the world's 7,000 languages, he says, are no longer taught to children.

Davis is the author of 15 books, including The Serpent and the Rainbow, One River, and The Wayfinders. His many film credits include Light at the Edge of the World, an eight-hour documentary series produced for National Geographic. In 2009, he received the Gold Medal from the Royal Canadian Geographical Society for his contributions to anthropology and conservation, and he is the 2011 recipient of the Explorers Medal, the highest award of the Explorers Club, and the 2012 recipient of the Fairchild Medal for Plant Exploration.
The Lesher Center for the Arts strives to provide accurate advisories for each performance in regards to special effects that may affect patron health and sensitivities, including but not limited to smoke, strobe lighting, graphic violence, and aggressive sound effects.  However, the Lesher Center for the Arts does not always provide advisories in regards to content, as content sensitivities vary patron to patron.  If you have any questions or concerns about content, please contact the Lesher Center Ticket Office prior to purchasing your tickets, as all sales are final; the Lesher Center for the Arts will not refund any order to patrons who choose not to see a performance based on subject matter or personal view of content or quality.  As a rental facility, the Lesher Center for the Arts may not be provided information on every intended special effect and maturity appropriateness in advance.
Visit
1601 Civic Drive
Walnut Creek, CA 94596
Call Us
(925) 295-1400
Keep In Touch